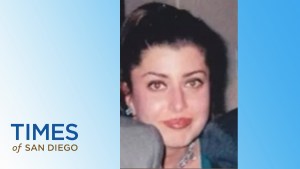 A judge on Friday ordered a man who allegedly killed a woman in her Rancho Peñasquitos condominium to stand trial on a murder charge.

San Diego police Lt. Steve Shebloski said that responding officers found Dadkhah “obviously deceased” inside the condo. They located Chambers at the residence and arrested him.

According to preliminary hearing testimony, Dadkhah’s body had been wrapped in a blanket and left on her couch. Deputy Medical Examiner Greg Pizarro, who performed the autopsy, testified that the victim suffered blunt force trauma to her head.

Responding officers found blood smeared on the floor and walls of the condo, along with a broken sliding glass door. Det. Steven Choy said fragments of glass were strewn about the interior of the residence, indicating the window was shattered from outside the condo.

Chambers allegedly told a homicide detective that he and the victim were in a relationship and that he would stay at the condo occasionally.

According to Det. Christopher Murray, Chambers told him that he and Dadkhah had fallen asleep on the couch and when he woke up in the morning, she was dead. Murray testified that Chambers said he didn’t notice any of the injuries to her face or body.

When asked to explain numerous injuries Chambers had on his arms and legs, he told Murray that he may have sustained injuries from picking up pieces of broken glass from the sliding glass door, the detective testified.

Chambers also told Murray that the sliding glass door was already broken when he arrived at the condo on the evening of June 14.

In a news release announcing Chambers’ arrest, the police department said officers had been to the condo the previous evening on a report of a disturbance involving Chambers, but left after being unable to make contact with him or anyone else inside.

Several of Dadkhah’s neighbors told news outlets that they called police on the night of June 14 to report a man had broken into her condo and that sounds of a fight could be heard inside, but officers did not arrive until more than 90 minutes after the first 911 call.

One of Dadkhah’s friends, Shannon Jones, told outlets that Chambers and Dadkhah never dated and that he had met her a few years earlier at an organization where she worked.

Chambers had been ordered to stay away from Dadkhah due to his 2020 conviction in a vandalism case in which the woman was the victim.

Nonetheless, neighbors say he was at the condo on numerous occasions. Murray testified that surveillance footage from a nearby residence showed that in April of 2022, Chambers had been at the condo and shoved Dadkhah onto a stairwell in the courtyard of her apartment.

Chambers remains in custody without bail.