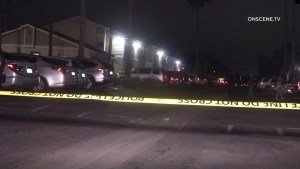 The apartment complex that the SWAT team was called to. Courtesy OnScnee.TV

A SWAT team was called to the Palm City neighborhood of San Diego Friday after a woman shot a tow truck driver who was trying to repossess her vehicle, authorities said.

San Diego Police said a woman and a few others confronted the tow truck driver who was attempting to remove her vehicle near the intersection of Palm Avenue and Hollister Drive at about 1 a.m., according to NBC7 San Diego.

The woman pulled out a gun and shot the driver at least once in the arm, police said. The driver was taken to the hospital and expected to survive.

The group was believed to have retreated into the nearby Pacific Point apartment complex, prompting police to surround the building and call a SWAT team to respond.

After several hours, officers made their way inside two apartments and determined that they were not there. The investigation was continuing.