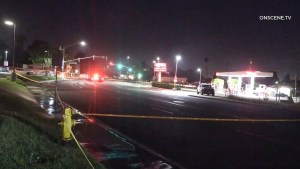 The intersection where the two pedestrians were killed. Courtesy OnScene.TV

A teenage girl and her stepfather were killed in a suspected DUI crash that shut down a major intersection in National City from Wednesday night until early Thursday.

The pedestrians – the girl was 15 – were struck by a car National City Police said was driven by Tayishe Ann Baltys, 43. Investigators suspect her of being under the influence of alcohol at the time. She faces charges of DUI and gross vehicular manslaughter.

The crash occurred near the intersection of East Plaza Boulevard and Harbison Avenue just before 10 p.m. Wednesday.

Police said Baltys had been heading west in the 3100 block of East Plaza Boulevard when her 2020 Toyota Prius struck the girl and her 39-year-old stepfather as they walked home from a visit to a neighborhood market.

Upon arrival, officers found both pedestrians on the ground and the driver in the vehicle, according to ABC 7.

The girl died at the scene while doctors pronounced her stepfather dead at Scripps Mercy Hospital. Authorities withheld their names pending family notification.

Baltys was booked into Las Colinas women’s jail in Santee, where she was being held on $500,000 bail pending arraignment, scheduled for Friday afternoon.