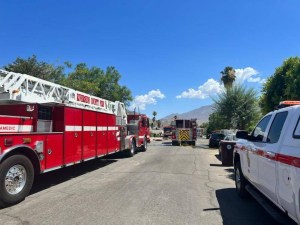 The Riverside County Fire Department responded to a vegetation fire in Temecula Sunday.

Firefighters contained the flames at 3:31 p.m. and estimated the size of the blaze at two acres, according to the Riverside department.

The fire was reported around 2:15 p.m. in the 30900 block of Samantha Lane, south of Temecula Parkway, burning in heavy vegetation, the department said.

There were no injuries reported. The cause of the fire was under investigation.

The area is about six miles from Rainbow, the northernmost community in San Diego County, and northwest of the Pechanga resort.