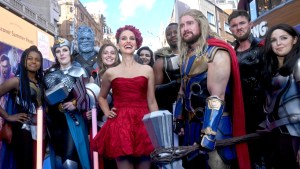 The stars of “Thor: Love and Thunder.” Photo via @thorofficial Twitter

“Thor: Love and Thunder” opened to a smashing $143 million this weekend, notching another entry in what’s been a torrid season at the box office after two down years during the coronavirus pandemic, according to industry estimates released Sunday.

Adding a little romance to the mix, with Natalie Portman starring alongside Chris Hemsworth as the hammer-wielding god, proved to be a winning formula for Marvel’s four-film franchise, which recorded its biggest opening yet.

Witness the #1 MOVIE IN THE WORLD

It was the third biggest opening of the year, behind “Doctor Strange in the Multiverse of Madness” and “Jurassic World: Dominion,” and the fifth film since Memorial Day weekend to earn more than $100 million in its first weekend.

“Top Gun: Maverick” continued its amazing run, pulling in another $15.5 million in its seventh week for a cumulative domestic total of over $597 million.

“Elvis” was fourth with $11 million Friday through Sunday in its third week, followed by “Jurassic World Dominion” with $8.4 million in its fifth week.