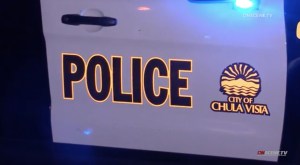 San Diego Crime Stoppers is offering a reward of up to $1,000 for information leading to an arrest in the weekend shooting of a San Diego man, a Chula Vista Police Department spokesman said Tuesday.

Shortly before 2 a.m. Sunday, officers responded to a gunshot victim being dropped off at Scripps Mercy Hospital in Chula Vista, Sgt. Anthony Molina said in a news release.

Molina said Fimbres “is believed to have been transient and living in the South Bay area of Chula Vista and San Diego.”

Witnesses told police that the vehicle that dropped Fimbres off — which contained three occupants — was a late-model white Jeep Patriot with black rims, Molina said.

Police investigating the shooting death are asking the three occupants or any other witnesses to come forward.

Anyone with information about the shooting is asked to contact Crime Stoppers at 888-580-8477, or anonymously submit a tip via online or mobile application at http://p3tips.com/409.