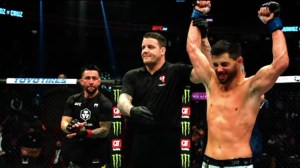 UFC returns to San Diego for the first time since 2015 with a bout featuring top bantamweights – No. 5 Marlon Vera and former champion, No. 8 Dominick Cruz, a local fighter.

UFC Fight Night takes place Saturday at Pechanga Arena and will air on ESPN, with simulcasts in English and Spanish on ESPN+ and ESPN Deportes. The main card begins at 4 p.m. following the preliminary fights at 1 p.m.

Rising star Vera (19-7-1), from Ecuador, will be fighting in his second consecutive UFC main event. Vera owns the record for most finishes in UFC bantamweight history, including those in his victories over former champion Frankie Edgar, Sean O’Malley and Brad Pickett. By taking out Cruz, he could enter into the UFC title picture for the first time.

Former UFC and WEC bantamweight champion Cruz (24-3), who trains in Santee, Cruz has logged wins over fellow champions TJ Dillashaw and Demetrious Johnson. If he halts Vera’s momentum, he could break back into the Top 5 rankings.

Other bouts – one features a Tijuana fighter – on Saturday’s card include:

The most prolific finisher in BW history