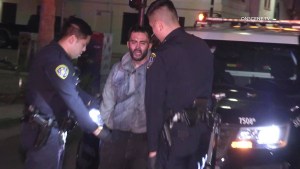 No injuries were reported after witnesses and victims helped stop a carjacking early Wednesday in downtown San Diego.

San Diego Police officers found a man hiding behind a parked car after reports of an attempted car theft in the 800 block of 10th Avenue, near E Street.

When officers approached the suspect, he ran into the driver’s seat of another vehicle. The owner of that vehicle and another man rushed the car and began striking the suspect. Police removed the suspect from the vehicle and detained him.

Another man, Arthur Calvin, told ABC 10 the suspect attempted to take his vehicle moments before the confrontation.

“He tried to jump in my car and fight with me at the same time,” Calvin told the station. “I had to pull over. Oh man, it was a trip.”

Police arrested the suspect and seized drugs and paraphernalia. The suspect was taken to a hospital to be assessed.