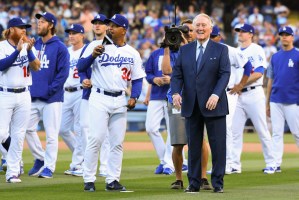 Legendary Dodger broadcaster Vin Scully died Tuesday at the age of 94 at his home in Hidden Hills, near Calabasas, the team announced.

“We have lost an icon,” said Dodger President and CEO Stan Kasten said in a statement released by the team at 8:15 p.m. “Vin Scully was one of the greatest voices in all of sports.  He was a giant of a man, not only as a broadcaster, but as a humanitarian.  He loved people. He loved life.  He loved baseball and the Dodgers.  And he loved his family.

Scully broadcast Dodger games from 1950 – when the team was still in Brooklyn – through his retirement in 2016 at age 88.

The Padres, in a tweet responding to the Dodgers post about Scully’s death, called him “a true gentleman and the greatest storyteller to ever sit behind a mic.”

Our hearts are with the Dodgers organization tonight as the baseball world mourns the loss of legendary broadcaster, Vin Scully.

A true gentleman and the greatest storyteller to ever sit behind a mic. Rest easy, Vin.

Either on the team or NBC broadcasts, Scully called such memorable moments by the Dodgers (or their opponents) as:

Scully’s many honors include:

A ranking system devised by author Curt Smith for his 2005 book “Voices of the Game” determined that Scully was baseball’s greatest announcer, giving him a perfect score of 100, based on such factors as longevity, language, popularity and persona.

At a news conference the day before he broadcast his final game at Dodger Stadium, Scully said he would like to be remembered as “a good, honest man, a good husband, a good father, a good grandfather. I’m not even thinking about sports announcing.”

Mr. Scully, the greatest of all-time. Thanks for all you did. You will be missed.

Padres broadcasters mourned him as well. Mark Grant said simply, “thanks for all you did.” Bob Scanlan also tweeted that he “learned to love baseball listening to his voice. MLB & the world has lost a treasure.” The MLB Network called Scully “the voice of our game.”

Given his longevity, Scully expressed his sadness on the loss of many greats, including Padre Hall of Famer Tony Gwynn, who died in 2014.

I will forever cherish the cumulative hours I spent talking with Vin Scully over 4 decades of a baseball career. So humble so classy so magnificent a man and a broadcaster like no other. Be with God my friend. Thank you for treating me as an equal even though I wasn’t.

“I used to love to tease him. We knew he was a brilliant hitter, but I would say to him, ‘you know Tony, I’ve been giving it a lot of thought, you ought to learn to bunt,’ and he would start laughing and his whole body would shake, tears would fill his eyes,” Scully said, while calling Gwynn “one of the really special people.”

Scully is survived by five children, Kevin, Todd, Erin, Kelly and Catherine, 21 grandchildren and six great-grandchildren. His second wife Sandi died in 2021. His first wife Joan died in 1972. One of his sons, Michael, was killed in a helicopter crash in 1994.