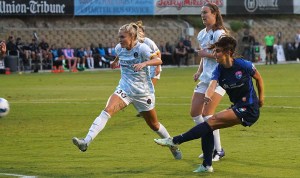 “I’m just proud of the character we showed tonight and kind of bouncing back from a couple of tough losses,” Morgan said. Being “back in the mix at the top of the table is always a good thing, so we are going to build momentum off of this.”

Ebony Salmon of Houston (7-5-4) opened the scoring early in the 7th minute with a shot from inside the box for the visiting side’s lone goal of the night.

The Wave (8-5-4) responded quickly in the 13th minute to even up the scoreline. Forward Morgan beat the keeper with a left-footed shot to record her 12th of the 2022 season. Morgan now leads the Golden Boot Race once again, followed by Sophia Smith who has 11 goals.

On scoring her 50th NWSL goal, Morgan said: “I guess I heard that earlier, but I totally forgot about it.”

On Jakobsson scoring her first club goal, Wave coach Casey Stoney said: “Yeah, I’m really pleased for her. She’s obviously had quite a few (attempts) and there was one that came off her shins as well when she’s in. So that’s a big weight off her shoulders now that she’s got a goal.”

Stoney called the goal an unbelievable finish from a tight angle.

“She’s had easier chances than that, and I’m so pleased for her,” Stoney said. “She made a big difference when she came on, just sprinting up that back line and getting in behind.”

Said Morgan of Jakobsson: “I was definitely more excited when she scored than when I scored.”

In the 67th minute, after a lot of action inside Houston’s box, Ali put the ball in the back of the net from close range to push Wave ahead 2-1. Assisted by Makenzy Doniak, Ali’s game-winner was her second regular season goal and second goal in the last three matches.

In the 90th minute, Jakobsson made a breakaway run and beat the keeper one-on-one for her first-ever club goal. The shot was assisted by Doniak, her second assist of the night.

“I came back from EUROs (playing with the Swedish national team) and it was a little bit tough for me,” Jakobsson said. “To come back and play with the team has been really great, and to come on and score was really important for me. I have worked hard for that and finally I could score the goal.”

But even with her team seeming to lack a “little bit of confidence on the ball,” Stoney said “you’re playing against a team that’s above you in the table, and we come out and get a win. I can’t be any more proud of the players and the way they reacted.”

Stoney conceded “it wasn’t our prettiest performance. We had to play a little bit ugly at times.”

San Diego now embarks on two road matches, facing the Portland Thorns on Aug. 27 followed by the Washington Spirit on Sept. 10. The club then returns home to open at Snapdragon Stadium on Saturday, Sept. 17, with single-game tickets available now.