Wave Stays on Top Despite 5 Stars Away, With Not-So-Secret Weapon on Sidelines 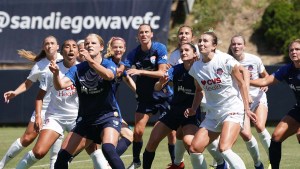 Despite playing without five top players, the San Diego Wave FC kept up its winning ways Sunday in a 2-1 victory over the visiting Washington Spirit.

The win was “massive,” coach Casey Stoney said, coming amid the absence of Alex Morgan, Naomi Girma and Taylor Kornieck with Team USA seeking to qualify for the World Cup and the 2024 Olympics, plus goalie Kailen Sheridan (playing for her native Canada) and forward Sofia Jakobson (Sweden).

Stoney has called the matches during international competition an opportunity for non-starters to shine.

So how did the first-year expansion club shoot to first place in the National Women’s Soccer League — and continue to sit at the top?

Forward Alex Morgan’s record 11 goals so far certainly has been key. Sheridan’s impressive saves have stifled opponents and the Wave’s significant deep bench has been there in the clutch.

Their not-so-secret weapon: the head coach.

The Marine Band played patriotic tunes before the match and at halftime. Photo by Chris Stone

Belle Briede (left) is congratulated by Marleen Schimmer, who assisted in the score. Photo by Chris Stone

Wave player Belle Briede watches the ball go into the net as she makes her first goal of the regular season. Photo by Chris Stone

Young soccer fans enjoy the match between the San Diego Wave and the Washington Spirit. Photo by Chris Stone

Washington Spirit players return to the pitch as sprinklers wet the grass just before the beginning of the second half. Photo by Chris Stone

Fans in the cheering section celebrate after the second Wave goal. Photo by Chris Stone

A young fan in the stands shows her support of the San Diego Wave FC. Photo by Chris Stone

Katie Johnson (center) makes an attempt on the goal in the second half of the SD Wave match. Photo by Chris Stone

Abby Dahlkemper (left) played 90 minutes in her return to the pitch. Photo by Chris Stone

Throughout the first half of the season, player after player has praised the environment Stoney created.

Some have said they are improved and comfortable in play.

Many came from teams where head coaches were fired or stepped down amid charges of psychological abuse. Half of the coaches in the NWSL last year lost or relinquished their jobs after accusations.

With Stoney, they are finding a space to learn and grow without the fear of being berated for mistakes.

Asked after Sunday’s match what she does that makes her players love her so much, Stoney said, “It’s incredible what you can achieve when you put value into each individual.”

“And I deeply care about all my players,” she said.

Stoney said she has honest conversations with her players and says things they may not always like what she says about their performances, but “I wrap enough support around them.”

@bellebriede with her first goal of the season

Her well-being and performance coaches try to create an atmosphere they receive support and mistakes are seen as opportunities to learn from.

“They can only get that relationship with me if they trust me,” the head coach said after Sunday’s game at USD’s Torero Stadium. “So I’m in a very privileged position that these players trust me, that they will have honest conversations with me that they feel they allow me to care for them.”

Stoney says she is the first person to hold her hand up when she makes mistakes.

“I don’t always get it right. And I asked them — they have a voice in my environment — when I don’t get it right. You tell me how can I do it different for you?” said the coach who moved here from London to establish the expansion team.

Stoney says in her long career as a player she observed how she was coached well and poorly. And she uses those lessons in her own coaching.

“They’re so open and so coachable,” she said of her team, “and I’m very, very privileged that I get to work with them every day.”

On Sunday, the team held on to win three points with goals by Makenzy Doniak, her second this season, and Belle Briede, who scored her first career NWSL regular-season goal.

The Wave remains in first place with 21 points, two over the Chicago Red Stars.

Defender Abby Dahlkemper returned to the pitch Sunday after an extended absence due to broken ribs, illness and other injuries. Dahlkemper played the whole 90-plus minutes.

“Having Abby back was massive — she’s a huge player for us and her character is incredible,” Stoney said.

Doniak scored for a second consecutive match as she took Christen Westphal’s pass from the right edge of the penalty area and fired a shot into the back of the net in the 36th minute for a 1-0 advantage.

Later in first-half stoppage time, rookie Briede extended the lead. Marleen Schimmer was key to the set-up, dribbling toward the Spirit’s defense.

She sent Briede a ball that led to a one-touch shot into the back corner, handing Wave a 2-0 lead heading into halftime.

Goalkeeper Carly Telford, who made her first career NWSL regular-season start after a 20-year career in England, made stops and saves and held onto a clean sheet until Washington’s Jordan Baggett headed in a cross during the final minute of stoppage time.

“I’m extremely proud of the performance today,” Stoney said. “I thought we dominated large periods and we probably could have put the game out of sight a couple of times. They stepped up today.”

She also praised Telford, who has been in Sheridan’s shadow.

“I’m really pleased for her performance. That was what she needed — and the team needed.”

The Wave’s next match is Saturday against Angel City FC at the Banc of California Stadium. The 7:30 p.m. game — airing on Paramount+ — is the first regular-season meeting with the Los Angeles club.

The Wave’s next home match is a Friday night contest — July 15 — against Racing Louisville FC. The date also marks the 50th anniversary of Title IX.