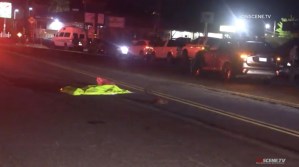 The victim’s body lies covered on Bradley, with the car that hit her in the background. Photo credit: OnScene.TV

A woman died in El Cajon early Sunday after being struck by a car while jaywalking on a dark street.

Witnesses told the California Highway Patrol that the 29-year-old woman had walked across the street outside the crosswalk when a male driving eastbound on East Bradley Avenue hit her.

The driver, 21, stopped immediately after the collision, at about 1:30 a.m., OnScene.TV reported, and is cooperating with authorities.

Other accounts indicated that the woman’s boyfriend had crossed the street in front of her and yelled, “Hurry up, there’s a car coming.”

The boyfriend of the victim, according to OnScene, said the driver was speeding and playing loud music before hitting the victim, who leaves behind a 10-year-old son.

Medics from San Miguel Fire and Rescue pronounced the woman dead at the scene. The CHP blocked Bradley while investigating.