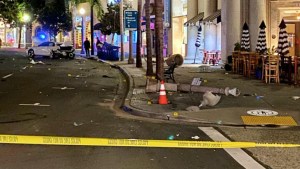 Police tape in front of the crash site near Hotel del Coronado. Photo via coronadopolicedepartment Twitter

A 25-year-old woman was killed early Friday in a possible DUI-related car crash near the Hotel del Coronado, authorities reported.

Patrol officers responding to the single-vehicle wreck in the 1100 block of Orange Avenue found the victim, who had been riding in the back seat of a white sedan, gravely injured at about 12:30 a.m., according to the Coronado Police Department.

The woman, whose name was withheld pending family notification, died at the scene.

Paramedics took the 20-year-old man who had been driving the car and a woman, also 20, who had been riding in the front passenger seat, to a hospital for treatment of non-life-threatening injuries. Their identities also were not released.

Investigators believe intoxication and speeding may have played roles in the fatal accident, according to police.