Woman Killed, 2 Children Hurt in Solo Crash on I-8 in Alpine 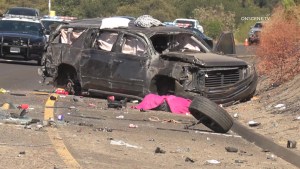 The driver of an SUV died Friday after the vehicle went down a highway embankment near Alpine. Photo via OnScene.TV.

A 35-year-old motorist was killed and two young girls injured Friday when the SUV they were in crashed on Interstate 8 in eastern San Diego County, authorities reported.

The Lakeside woman lost control of the Chevrolet Tahoe for unknown reasons at about 8:30 a.m. while she and the children, ages 3 and 9, were traveling west through Alpine, according to the California Highway Patrol.

The vehicle veered into an unpaved center median west of Tavern Road, overturned, tumbled down an embankment, and came to rest on the eastbound side of the freeway.

The unrestrained driver was ejected from the vehicle and died at the scene of the accident, CHP public affairs Officer Travis Garrow said. Her name was withheld pending family notification.

Paramedics took the children — who had been riding in the back seat of the SUV, the younger one secured in a car seat and the other wearing a seat belt — to Rady Children’s Hospital in San Diego for treatment of moderately serious injuries, the spokesman said.

The cause of the wreck was under investigation.