2 Bystanders Hit — One Seriously — After Argument Ends in Gaslamp Shooting 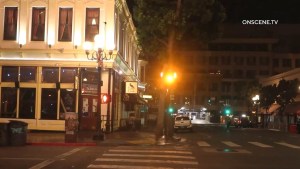 The street corner in the Gaslamp where the shooting occurred. Courtesy OnScene.TV

Two women who were bystanders are in the hospital Saturday after being shot during an argument between two groups in the Gaslamp Quarter.

San Diego Police were called at 10:34 p.m. Friday to Fifth Avenue and F Street where witnesses said an argument began between two groups and someone opened fire.

One woman was seriously wounded in her torso and the other was hit in her hand, Officer Robert Heims said.

Detectives from the department’s Central Division are investigating the shooting and anyone with information  was asked to call 619-744-9500 or San Diego County Crime Stoppers at 888-580-8477.