Attacker Jailed After Stabbing Aboard Orange Line Trolley in Encanto 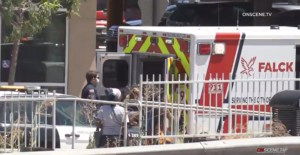 A stabbing aboard a Metropolitan Transit System trolley in San Diego left one man hospitalized Friday and another under arrest.

The Orange Line assault came to light shortly before 11 a.m. Patrol deputies responded to a report of an injured man at the Massachusetts Avenue Trolley Station in Lemon Grove, according to the San Diego County Sheriff’s Department.

There, they found Terry Dijon McClure, 26, suffering from superficial cuts to his hands and one of his arms, Sgt. Michael Power said.

“While deputies were with (McClure), another stabbing victim was being attended to at the 62nd Street MTS Trolley Station by the San Diego Police Department,” Power said.

Both McClure and the victim were treated at Scripps Mercy Hospital. After medical staffers tended to his cuts, McClure was booked into San Diego Central Jail on suspicion of assault causing great bodily injury.

The other man, whose name was not released, underwent surgery for a stab wound to his upper body but is expected to survive, Power said.

McClure’s injuries were believed to be self-inflicted.

“The cuts on his hands (were) consistent with the weapon slipping in his grasp, which is not uncommon in stabbing attacks,” Power said.

Sheriff’s officials did not disclose a motive for the assault.