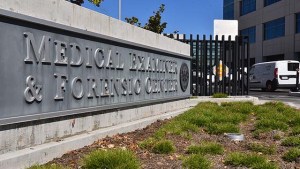 A female inmate died at a hospital early Saturday four days after the San Diego County Sheriff’s Department took her into custody on a warrant.

Erica Wahlberg, 40, was arrested at around 2:45 p.m. Monday by sheriff’s deputies for an outstanding drug warrant, according to Lt. Chris Steffen of the department’s Homicide Unit.

Just before 9 p.m., Wahlberg was transferred from the Vista Detention Facility to the Las Colinas Detention and Reentry Facility in Santee, the lieutenant said.

Just before 9:30 p.m., she arrived at Las Colinas, Steffen said.  Although the Vista facility accepts female arrestees, those unable to make bail or who are ineligible are transferred to the Santee site for housing.

“On June 28, before 4 a.m., Wahlberg was in the process of being housed when she started showing signs of medical distress and was sent to a local hospital for treatment,” Steffen said.

Just after 5 a.m. Saturday, doctors at the hospital pronounced her dead.

The Sheriff’s Homicide Unit responded to investigate the incident. The unit investigates all deaths of persons in custody, Steffen said.

The cause and manner of death were still under investigation. The county Medical Examiner’s Office is expected to conduct an autopsy Sunday.

The Citizens’ Law Enforcement Review Board also was notified of her death.

A Sheriff’s Family Liaison officer was assigned and her family was notified of her death.