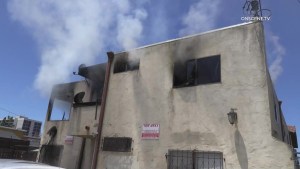 A body was found Monday inside an apartment complex in the Teralta West neighborhood, where firefighters were called to a structure fire.

The San Diego Fire-Rescue Department was called to 4267 Copeland Ave. at 11:49 a.m. in response to the fire. The building was ablaze and filled with smoke when crews arrived, according to the SDFRD incident page.

After knocking the fire down in 10 minutes, firefighters discovered the body somewhere in the complex, Battalion Chief Jeff Mitchell said.

An investigation team was called out, but no further information about the decedent was available, Mitchell added.

Mitchell said only one apartment unit, where the body was found, sustained damage. He added that the 16-unit complex had been evacuated.

According to the SDFRD incident page, there were no other reported injuries. No property damage estimate was available.