Deputy Recovering from Injuries Suffered During Scuffle and Shooting at Hospital 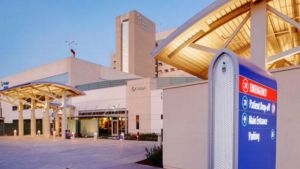 A sheriff’s deputy was recovering Tuesday from broken bones he suffered over the weekend during an altercation at a Hillcrest hospital with an inmate who managed to snatch away the lawman’s gun and fire it off harmlessly.

The struggle that led to the non-injury shooting at Scripps Mercy Hospital broke out about 3:30 p.m. Saturday, as the deputy was preparing to take the arrestee to county jail following a medical evaluation, according to the San Diego County Sheriff’s Department.

During the fight, the suspect made suicidal statements, wrested away the lawman’s gun and fired it, Lt. Karen Mullins said.

“No one was injured by the gunfire, and there was no evidence that any bullets left the hospital room where the incident occurred,” the lieutenant said. “The hospital resumed normal operations shortly thereafter.”

The deputy was treated for a broken hand and wrist. No other injuries were reported.

The inmate, whose name was not released, was admitted to a county psychiatric hospital for observation and mental-health treatment.