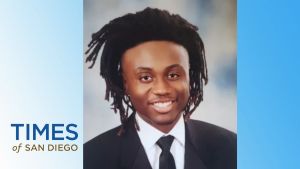 Authorities Friday publicly identified a teenager who was fatally shot by an unknown assailant last weekend while leaving a college-area party.

Kevin Burton, 18, was in a vehicle with friends about 1:45 a.m. Saturday when he suffered a gunshot wound to his upper body in the 6400 block El Cajon Boulevard, according to the San Diego Police Department.

Paramedics took Burton to a hospital. Due to his grave condition, he was transferred to a trauma center that could provide more intensive care. He succumbed to his injuries there.

Investigators have determined that the victim had just left a social gathering on Art Street when he was fatally shot.

“Detectives are still working to determine if there was some sort of altercation or incident at the party prior to the shooting,” SDPD Lt. Jud Campbell said.

A second bullet believed to have been fired during the same shooting struck a window at an apartment complex, causing no injuries.

There were numerous people in the area at the time of the shooting, according to police.

“Most of these people had left the scene before detectives arrived,” the lieutenant said.

Police ask anyone who might be able to provide information about the shooting to call the SDPD Homicide Unit at 619-531-2293. Anonymous tips may be submitted to San Diego County Crime Stoppers, which can be reached at 888-580-8477 or sdcrimestoppers.org.

A GoFundMe campaign was created to help the family with Kevin’s funeral expenses.