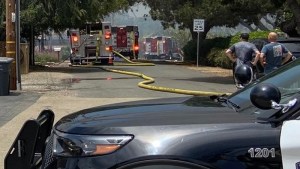 Crews at the scene of the fire in Carlsbad. Courtesy of the city

A vegetation fire was contained Saturday near the Buena Vista Lagoon, after some residences in the area were briefly evacuated.

The Carlsbad Police Department announced that the fire was contained at about 2 p.m. Saturday.

“Please continue to stay clear of the area while we finish up,” police tweeted. “We will let you know when the roads reopen.”

Fire crews from multiple agencies battled the fire starting at 1:15 p.m. around the Buena Vista Lagoon in Carlsbad. Crews from the Carlsbad Fire Department responded to the area of State Street, Laguna Drive and Buena Vista Circle.

Out of an abundance of caution, authorities evacuated residences on Buena Vista circle, Kremeyer Circle and Laguna Drive near the lagoon.

The public was advised to avoid the area. Police said Carlsbad Boulevard into Oceanside was impacted and drivers should choose an alternate route.

A helicopter scooped up water from the lagoon and dropped it on hot spots at 1:41 p.m., officials said.