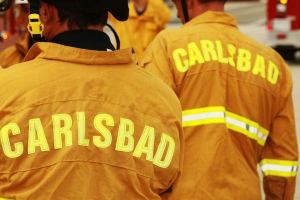 Fire crews from multiple agencies were battling a vegetation fire Saturday around the Buena Vista Lagoon in Carlsbad, and police were evacuating nearby residents.

Crews from the Carlsbad Fire Department responded to the area of State Street, Laguna Drive and Buena Vista Circle at about 1:30 p.m.

Out of an abundance of caution, authorities were evacuating Buena Vista circle, Kremeyer Circle and Laguna Drive near the lagoon.

The Oceanside Police Department, the San Diego County Sheriff’s Department and the California Highway Patrol were also helping firefighters in the effort.

The public was advised to avoid the area. Police said Carlsbad Boulevard into Oceanside was impacted and drivers should choose an alternate route.

Water drops were being made by helicopter at 1:41 p.m., officials said.