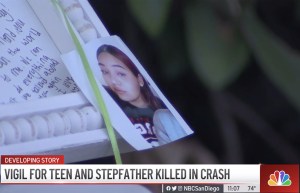 A motorist who was allegedly under the influence of alcohol when she struck and killed a 15-year-old girl and her mother’s boyfriend in National City pleaded not guilty Friday.

According to prosecutors, Baltys was previously charged with DUI for a Jan. 29, 2020, incident that also involved alcohol.

She pleaded guilty to a lesser offense, a misdemeanor known as a “wet reckless,” and a judge sentenced her to one year of probation. Deputy District Attorney Blair Pickus said she completed probation about three weeks prior to the fatal crash.

In the current case, the prosecutor said a preliminary alcohol screening indicated she had a blood-alcohol content of .16% after the crash. That’s two times the legal driving limit in California.

The defendant was heading west in the 3100 block of East Plaza Boulevard shortly before 10 p.m. Wednesday when her 2020 Toyota Prius struck the teenager and her mother’s boyfriend, 39, as they walked home from a neighborhood market, according to police.

The girl died at the scene, Sgt. Kenneth Springer said. Paramedics took her stepfather to a hospital, where doctors pronounced him dead.

Officials have not released the names of the victims, but family members identified them as Brian McKee and Jessica Talamante.

At a Thursday vigil, the girl’s mother told NBC San Diego that her daughter would have turned 16 on July 6. Jessica’s older sister, according to the report, suffered minor injuries in the collision. McKee had initially been reported to be stepfather to the teen and young woman.

Pickus said in court Friday that upon seeing the defendant’s vehicle barreling towards them, McKee unsuccessfully tried to push Jessica out of the way.

The impact threw both victims about 100 feet from the intersection, the prosecutor said.

Baltys, who appeared in court remotely from the Las Colinas jail, will be held without bail pending a July 7 bail review hearing.